So many baubles smashed.

There was one Christmas when my father in a fit of rage pulled our Christmas tree up by its branches and ripped it from its soil filled pot in one corner of the lounge room.

The tree fell heavily and there was a clattering of baubles, a sea of cut glass that my mother later tiptoed through with her dustpan and brush.

My father sulked off to his room.

Some of the Christmas baubles had come from Holland, where they had once adorned the Christmas trees of my mother’s childhood.  Through them she had held onto hope for a better life on the other side of the world.
Did she lose hope then, at the sight of the smashed tear drop bauble, the one that hung from the topmost branch and glittered from its many edges?  This was a bauble renowned for its shape and the way its maker had caved in one side and filled it with a different colour and texture from the smooth round outside.
How could my father have done this?  How could one person so destroy the beauty of Christmas?
It was never the same again.  So many baubles smashed.

Over the next few years we went to Southland and bought new trinkets to put on the tree but none so glorious as those that came from Holland.

Today my mother is too old and tired for a tree.  She prefers her ancient nativity set, careful as ever to leave the baby Jesus hidden behind the crib until Christmas eve. 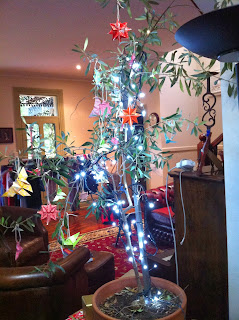 Once more this Christmas one of my daughters has decorated a potted olive tree from our back garden with origami birds and butterflies in subtle colours, alongside the glow of white lights from Target.
In our house where no nativity scene appears, there is only the spirit of Christmas, a time when tensions are high but love cuts deepest; where we help one another; think of one another; grow frustrated with one another and sigh at the advancing of another year’s ending.

May your Christmas be as good as mine, with all its hard edges and joy.
Posted by Elisabeth at 10:49 am 12 comments:

I made up a bowl of porridge for my daughter this morning, the easy stuff out of a sachet, with two minutes in the microwave instead of one and a half, given I had put in too much milk.  My daughter was in a rush for work and I was trying to help her get out the door in time.

The porridge at first was too sloppy and therefore needed more time in the microwave and then when she did not eat it immediately it became too lumpy.
I think of those three bears, and Goldilocks’s desire that things – chair, porridge, bed – be just right.

I did another Myers Briggs test this week and came out with a slightly different score from the first time I’d tried it.

I’m sure this is not the official test but it’s one that’s free to try on line.

My daughter reckons I should take the results of the first test seriously, at least more seriously than later results because by the second and third times I was likely to answer less honestly given I could anticipate the questions.

Funny questions like: after you have been socializing heavily do you prefer to spend time alone.
Well, yes and no.  I can manage more company after a I’ve been with a crowd but equally there are times when I’d like some quiet time.

This is why I dislike these tests so much.  They tend to demand 'yes' or 'no' answers and therefore become reductive.

I know the test managers ask the same questions in reverse order to try to trick the truth out of you but I suspect people can become test-savvy and answer in whatever way they feel might best suit their purposes.

These tests to me are like horoscopes.  You go along with whatever suits you – namely the positive interpretations, and ignore the rest.

At a glance, I’m not much of a judge.  The other results don’t surprise me so much.

I have my third Christmas party this afternoon, and my last bar Christmas day on Monday evening.  I haven’t done too badly.  I do not yet feel overwhelmed by the sense of excess this time of year brings.
Shades of the question I quoted above from the Myers Briggs test.  That one is to root out the introverts,  I'm sure.
My husband and at least one of our daughters are so-called introverts.  My older sister reckons a person on the introversion scale a la Myers Briggs, is simply one who derives energy from their own company, from quiet times.  While an extravert is a person who derives energy from time spent with others.

I’d like to think I derive energy from both sources and to an extent I suspect we all do.  But it’s true, I prefer the company of others to total and prolonged solitude.

When I was a school girl we went on retreats once a year.  A week or maybe three to five days during the school day dedicated to prayer.  I pretended to enjoy those days.  The imposed silence.

During retreats there were times when we sat in chapel together and a nun read to us or the priest held  Mass or benediction, something that involved noise, voices, or better still singing, but then later we were meant to make our own entertainment, namely in the form of more prayers and contemplation.
I can see us now, thirty or so fifteen-year-old girls, our missals in hand wandering around the gardens of Vaucluse Convent ostensibly in deep contemplation. 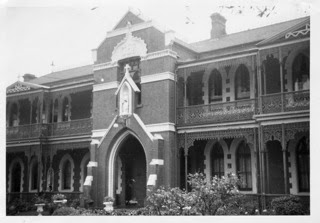 The more outgoing girls caught one another’s gaze and burst into fits of giggling.  The nun in charge who stalked around behind the rose bushes offered an unspoken reproach and silence prevailed again.

I longed for the hours to pass.  It felt as though I had been tied in a strait jacket and could not move my arms.  I should have known from this experience that I would never make a nun.

Nuns take vows of poverty, chastity and obedience.  All three would have been impossible for me, and yet there was a time in my life when I contemplated taking on such a life, out of love for my favourite teacher, whom I once decided I had wanted to emulate.  Even if it meant hours of imposed silence and a pretense – for me at least – of prayer.

This nun has since left the convent but not before I gave up on that particular vocation.

The other day I listened to Phillip Adams during his radio program Late Night Live on the topic of cults.  Apparently there is a group of people in London who were arrested.  Three women had been held in enforced captivity for thirty years, one of whom must have been born into slavery.  Apparently they are part of a cult.

Their story fascinates me but the discussion of cults fascinates me even more.  One speaker made the point that if you get a group of people together and keep them separate from outside influences for long enough they can begin to develop kooky ideas.

Madness breeds out of too much introversion, though equally there is the opposite madness, that of the mob.

It all comes down to balance I suppose, a bit like my daughter’s porridge this morning: not too runny, not too firm.
Posted by Elisabeth at 2:23 pm 3 comments:


I have unplugged, for fear of storms.  Varuna, the writers' house, sits on an iron stone and therefore, it’s safest to unplug.

To get here I took the train through places whose names are familiar to me, through Blaxland, Westmead and Penrith, Emu Plains, Wentworth Falls.

Here in the Green Room I have a view at the corner to east and south, or north and west. I cannot tell which because I am geographically challenged. 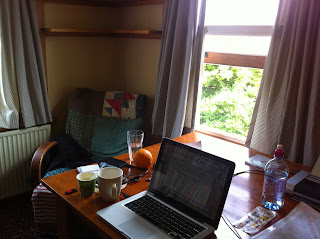 I have come to Varuna to find my father, or some semblance of him in a deeper directionality than I have known to date.

Within half an hour of my arrival a storm typical for this time of the year erupts.  I unplug.  A breeze dense with the smell of rain pushes against the curtains and washes away some of the musty smell of this house in which countless writers have penned their words. 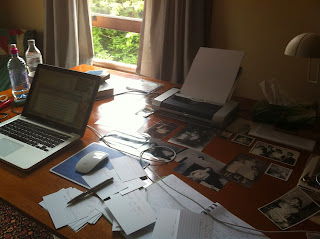 I look at the photo of my father as a boy, maybe six, maybe seven.  He sits on the floor cross-legged, one in a row of seven children who sit in the first row in front of the adults at what looks to be a wedding shot.  My grandparents are there too, in the corner first row standing behind the seated adults, which include the wedding couple.

I guess they are a married couple because the woman in white carries a bouquet but she has no veil.  The photo could have been taken in Freud’s time though not in the Vienna of his fame but in Haarlem Holland where my father lived for his entire childhood, and where my father met my mother and from where he took her to Australia before I was born.

I do not know why there are tears behind my eyes when I look at these photos, something about my inability to make sense of these times and these people, especially of my father and my father’s father and his mother.

The mystery of these people.  My father’s head is lowered but he lifts his eyes towards the camera as if he mistrusts the person taking the photo and his arms are folded.  Some of the other children in the photo fold their arms as well.  A technique of the photographer in those days to keep the children still, perhaps.  No one smiles as is the custom in these old photos.

Several are caught at that moment with eyes closed, including my paternal grandfather, the one who looks to me as though he could never be a relative of mine.  My grandmother, on the other hand, looks like me, the same long face, the angular chin.

My great grandparents are in this photo, too.  They sit on the side of the bride and I can only assume that this photo was taken at the wedding of my father’s aunt.  Apart from my father I know none of these people, unless I am to include my aunt Nell who might well be the baby in the photo seated on my great grandmother’s knee.  Nell I have met.  Nell who was named after my grandmother, Petronella and after whom by rights I should have been named but by the time I was born my mother tells me, my grandmother Nell was ‘in disgrace’.

‘What did she do?’ I asked.  Asking my mother questions such as these plunges her into a fug of memory to which she does not want to return.  I can see it in her eyes.  That glazed look.  A look that says, must we go there again?  I can’t bear to think on it.  I only want to think about the good times.

My mother is 94.  I should leave her in peace.  I should not trouble her about these things, but I cannot help myself.