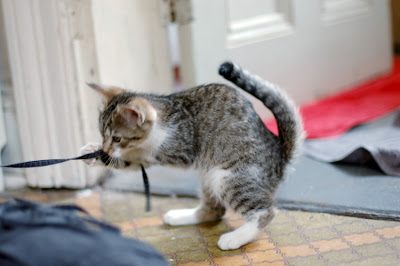 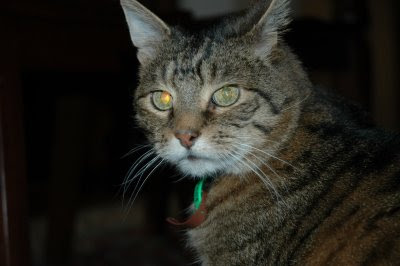 Winston pissed in the corner near the kitchen cupboards again this morning. He left a puddle deep enough for the apron ribbons to float into. The aprons ordinarily hang from the kitchen cupboard door.
Last time I washed them in similar circumstances, I told myself that I must not put them back there again or I must hang them in such a way as their ties do not reach the floor. But do you think I took my own advice?
I am ever the optimist, I hoped it would not happen again, and of course it has. So the aprons are back in the wash and another old towel has met its fate in the rubbish bin. It’s the easiest way to clean up the cat’s leakage.
I was going to say the great cat, but Winston is no longer a great cat. Winston has shrunk to half his size. I understand from our neighbors that he has kidney disease. They intend to keep him alive as long as possible. He is not their cat but they take responsibility for him. They provide a warm home for him on their veranda at night and they let him in by day. It's okay for them, Joanna is retired and spends most of her time at home. She can keep an eye on Winston and take him outside whenever he makes ready to pee.
If ever Winston sneaks inside here by day as soon as someone sees him, we throw him out, but it’s not so easy at night while we sleep. On top of which, I lock the exit cat door to keep our cats in at might and once Winston has made his way inside he can’t get out even if he wants to, without human intervention.
Why don’t I lock the cat door entrance, too, you might ask? I would, except that when I close the exit door shortly before bedtime our most intrepid cat, Anoushka is usually not yet in. I refuse to run around the back yard and neighborhood looking for her and I know that she will come in of her own accord soon, so I leave the cat door open for her.
'You should just leave Anoushka out for the night and shut the cat door both ways,’ my second daughter tells me. She is as sick of the puddles on the floor as I am. Her pink apron has already been soaked in Winston’s pee at least three times.

Winston is an orange red cat who once had a home somewhere in Beaconsfield Road nearby. He used to be fat. He traveled the neighborhood looking for food and was obviously quite successful. But then, one day it seemed, he had no home to go to. Our neighbour, Joanna, figured his owners must have left the area and abandoned him. She took Winston under her wing, scraggly cat that he is. She has a collection of Siamese cats who live permanently indoors. Now that Winston is ill and prone to peeing wherever and whenever he sees fit, he has become a burden.

‘I wish he were dead,’ I said to my daughter. I hauled the aprons into the washing machine and covered them in liquid soap. ‘He’s not fit to be alive.’
I’d be happy for Winston to live on as long as he’s not in pain, and as long as the neighbors want to take responsibility for him, but I do not want to have to deal with his pee anymore.

These days two of our daughters have been clamoring for a dog.
‘We need a dog,’ they say. Ella’s home for a few years yet, but Millie’s likely to leave soon. Rosie who always wanted a dog when she was little, such that we once gave her a gigantic toy dog for her birthday, complete with engraved dog tag, Towser, seems unfussed at the moment. She too plans to leave home soon.

I am adamant, no dog. My husband might relent. I suspect he’d love a dog. He grew up on a farm, but we cannot have a dog at the moment. Where’s the room?

We need a water tank, more than we need a dog. Where’s the room for that, a water tank that is? It’ll destroy the aesthetic balance of the back yard, but the roses under the eucalypt are water stressed, they probably won’t make it through another summer unless we do something.
Today my husband plans to install a soaker hose. They’re legitimate during this drought, but I’m hankering for a water tank, however ugly.
All this talk of financial doom and gloom, juxtaposed with the coming summer, and dams only 36.4 percent full, down on this time last year, focuses me on prevention before it’s too late, and that does not include a dog.
‘We will get a dog once the cats are all dead,’ my husband says. That includes three cats, all of whom are aged under four years, that’s at least a decade away. The girls maybe can install their own dogs in their own homes by then.

I would include a picture of one of our cats but I can't find one at the moment, nor do I have time to find one elsewhere. So here in the glory of adding images to my blog I will try to include a picture of Lotta, my oldest daughter's cat, now no longer the kitten she once was in the photo. A cat photo for effect.

The older cat is Pickles, our tabby, who died last year at seventeen years. Winston has taken on the look that Pickles developed shortly before he died, but Pickles was much loved and his passing mourned. Not so for Winston.
Posted by Elisabeth at 9:39 am No comments: 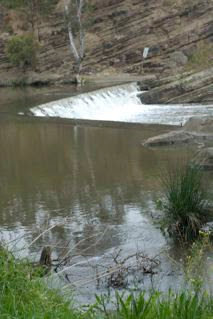 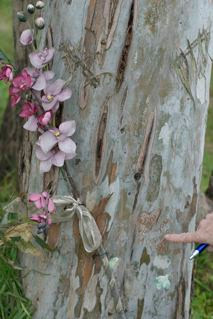 My daughter Rosie took these pictures for an assignment she's doing at the moment on cultural landscapes. Her chosen landscape is Dights Falls Park in Abbotsford. One of the photos I include here shows Dights falls, self evident, the other includes a grey eucalypt around which some one has tied a sprig of artificial orchids.
I have been haunted by this second image ever since I first came across it earlier this year when I visited the place with my husband. It is meant as a commemoration to a young woman, Lynette Phillips whose body was found in the Yarra River nearby. She was wrapped in a blue doona. The cause of her death is still unclear though it's evident she fell victim to foul play.

I have long loved the area for its haunting quality, more so now for its funereal quality. I can't go there without thinking about this young woman whom I never met. The memory of her is tied to the landscape.
Posted by Elisabeth at 11:57 am No comments:

I am reading two books at the moment, Gerald Murnane’s Landscape with Landscape and Alice Munro’s The View from Castle Rock. Both are examples of what Gerald Murnane describes as Autobiographical fiction, both use the events of their own lives to tell a story or a series of stories. Both describe a poetical impulse in childhood that involves a passionate love of nature. There was a time when I was about the age of my daughter Ella who is currently wrangling over her negotiations with her first, practically first ever boyfriend, well before I had boyfriends, or even considered the possibility, when I fell for nature. Head over heels. I longed for green hills and wide expanses. I longed for the silence of the bush, the beauty of trees and flowers and wide open skies. Nature was my muse. She-nature must be a she-would inspire the finest thoughts and words that could flow through my poetry, if only I could find a way of losing myself in her.
By the time I was fourteen the Sunday afternoon trips we made to special places, the Maroondah Dam, Emerald Lake, the Dandenong’s, were long over. Most weekends we stayed at home hovering in corners as my father became progressively drunk, until it all climaxed on Saturday night with his worst most drunken outburst, by which time he ran out of alcohol. He could not get anymore after 6pm on Saturday and once he’d drunk the last drop it would take the last hours of Saturday night into Sunday morning before he would start to sober up. Sundays he spent in a welter of guilt and self-reproach for his appalling behaviour over the last two nights and the possibility of going out for a Sunday drive was out of the question. Even so family trips to tourist destinations were no longer what I had in mind to represent the county. I wanted to be free to roam at will among the trees and hills, hidden from others. I wanted to lose myself in nature.

The Farm Road estate which spread for miles behind the AV Jennings estate where we lived in our brick veneer, two fronted block had only been half developed. In the far corner of the estate a kilometer or two along Farm Road where the old chicken sheds were slowly falling down, were the remnants of market gardens. You can still see some remaining gardens in places like Dingley, when you travel east along Centre Dandenong Road. The gardens in Cheltenham had already been sold but it took years before the developers started to clear them to make way for roads and new house allotments. I walked along Farm Road from its beginning where it formed a T with Warrigal Road alongside the golf course with its cyclone fence that held in manicured trees and gardens. I walked along the road itself that had recently been covered with asphalt in readiness for the assault of housing that would soon take place. Where the asphalt ended and the road became once more a wide dirt track I imagined the country began. There was one lone house, a small white weatherboard, dilapidated but still occupied judging by the washing on the line and the smoke rising from the chimney. It stood on the far side of the chicken shed and I imagined that it was still occupied by the owners of the chicken business who must have given up their chickens to make way for the relentless progress of housing developments. There was never anyone around as I walked on weekends up the middle of the lonely farm road to where the countryside began and civilisation ended. There were no signs warming that trespassers would be prosecuted but I often had the sense that I was walking on land the belonged to someone else and try as I might to create the idea that this was the countryside and therefore free for all, I still worried that someone would come out of that house, shotgun in hand and threaten to evict me, if I did not go voluntarily. My sojourns through nature therefore had a dangerous quality, as if at any moment I might be sprung.
I have long felt embarrassed by my childhood love affair with nature, until now when I read that Gerald Murnane and Alice Munro share it.
Posted by Elisabeth at 9:02 am No comments:

Elizabeth Jolley could never settle into her writing late at night until she was assured that the family was settled, the chores were done and all was well in her small world. I have a similar sense, I cannot settle when I am preoccupied with some earthly concern generally to do with the psychological (more often the psychological than the physical health) of one of my children or Bill. If someone out there is brawling, or deeply unhappy or entangled in the vagaries of a tortured love affair, which seems to be the case at the moment for fourteen-year-old Ella, then I cannot settle into my writing.
Posted by Elisabeth at 2:57 pm 2 comments: