At the moment I am sitting in Eleanor Dark’s studio with a rug over my knees and a heater close by, two heaters in fact.  It’s cold in the Blue Mountains, colder than I had imagined, but at least today the sun is shining and the world outside - despite the dew on the grass and the bare tress in the garden dripping with left over rain - looks almost spring like and therefore warmer, warmer at least than yesterday when the day was over cast from morning right through to night and there was a steady misting rain. 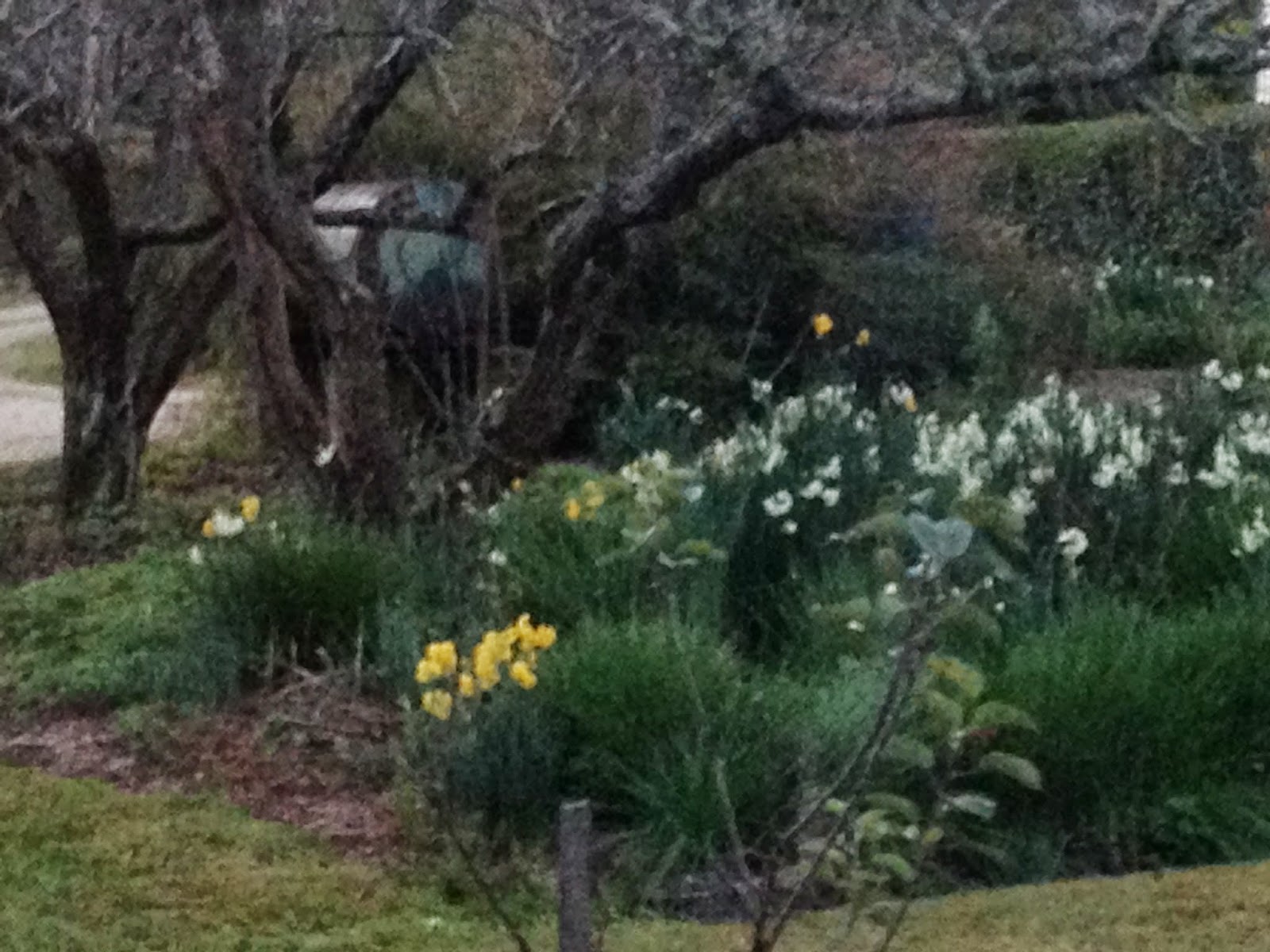 I went out for only one walk into town yesterday and did not enjoy it, not as I have enjoyed my walks through Katoomba in the past.  But it goes in cycles.  Exhilaration to misery in as little as five minutes.  The pressure to do nothing but write and read and think about writing is a luxury but it’s also a burden and for some reason I feel it more acutely this time.

I’m stuck in a well of the familiar and I cannot get out of it.
In this studio, once the writing place of Eleanor Dark, there is a series of drawers in which other writers who have used this room have left snippets of their writing drafts, a page or two, no more. And perched on top are two tall chests with flower embossed fronts in which someone has placed a slip of paper with the words:
‘Courage is the first essential.’

In the next cupboard alongside but separated by mouldy dictionaries and grammar books, this same person, I presume, has penned the words:
‘And coffee second.’

In another of the drawers below where there are countless screeds from countless writers I found one piece that has taken my fancy.  It’s from an Australian poet named Jude Aquilina and it reads like this:

First Penis Transplant
A cutting from The Herald, 2107

Today, the first penis
transplant was successfully
performed on a woman in her
twenties.  I’ve always wanted
one, stated the Sydney
housewife, to prove that
women can wear penises too. I
don’t intend to flash it nor
thrash it, just use it for its
natural purposes and I hope it
comes in handy around the
house.  I want to invent
practical attachments such as
dusters and dish mops.  How
many mothers have wished
for an extra hand? – crossing
the street with a child each
side, I’ll hang my handbag on
nature’s hook.  And when I
go dancing on summer nights,
I’ll wear bangles that jangle
from side to side. I really
think they’re going to catch
on, Women have been without
them far too long.  Surgeons
say their lists are full of
women waiting to fulfil their
masculinity; the problem at
the moment, unfortunately,
lies in the lack of donors.

Wow on two fronts. The Blue Mountains are wonderful - and I love the poem, Enjoy.

Love the poem. I didn't realise that appendage could have so many useful purposes!

Hope you were able to find your writing flow at Varuna. How lovely to be in Eleanor Dark's studio!

Shortage of donors; yes, I can understand that.

Thereby hangs a tale, of sorts.

That’s what every day’s like for me, “[t]he pressure to do nothing but write and read and think about writing.” That’s all I do. I get up, wonder what I’m going to do and don’t find many other things call out to me. So why am I not more productive? I think it’s to do with natural limits. You talk about the penis. I’ve been attached to mine for fifty-odd years now and although I can see where the author of that poem’s coming from I’m sad to report they’re nowhere near as useful as you might imagine. Even as “aiming tubes” they’re less than adequate. And as sex organs go I’d swap you my dick in a shot to experience a few multiple orgasms. Which is why I brought up the penis because it definitely has its limits. You can set aside all the time you like but even the hardiest—or plain determined—won’t manage more than four or five climaxes a day and he’ll probably need the next day off to recover. I’d an interesting e-mail exchange with a poet, a female poet (wouldn’t it’ve been so much easier to say ‘poetess’?), years ago about poetry and sex and we both agreed that there was definitely a… release would be as good a word as any during the writing process, a build-up of tension followed by a pleasurable release once the words came. It’s not something you can do all day long. Of course we were talking poetry. Prose is just something I do when not writing poetry. And just as with sex, I write less and less poetry these days. The novelty’s worn off. When I was seventeen everything was a source of inspiration. Not so much these days. Prose is functional. Prose is having sex. Poetry is making love. I exaggerate for effect but not entirely.

Carrie’s back in the States—her mother died last week—so it’s just me and the bird for the next three weeks. It’s different when she’s not here, no routine. Although there’s a side of me that likes a routine—the side that likes an orderly workspace—there’s something freeing about being able to do what I want when I want. It’s never as simple as that because my brain refuses to behave but I’d have that to work around whether Carrie was here or not. It does take me a while though to get used to the non-routine and I’m not sure three weeks is really enough time. I don’t think I’d enjoy a retreat, that’s what I’m trying to say. I also think I’ve find the novelty counterproductive. Here is so familiar I never have to think about it; I can wander around in the pitch dark comfortably. The only thing about Carrie being away is that phone call late in the afternoon asking me what I’ve done, what I watched on TV. It’s just her making conversation because she’s so far away but that brings its own pressure; I have to have something to report. When she’s here there’s no pressure. She can see me sitting here doing something and that’s enough. I miss that.

Is courage the first essential? I’m not sure I’ve ever felt courageous as a writer. But then I’ve not romanticised writing for a long time. You sit down; you write; end of. For me the first essential is having something to say that needs to be said. Which is the main reason why I write less and less. I watched a documentary on Philip Roth the last time Carrie went away. He’s quit writing now. The interviewer showed him a clip from when he was younger in which, during an interview, he basically said that he’d die if he couldn’t write. In response old Roth smiled: “I was wrong.” If I found I could no longer write what would I do? Start taking pictures. Begin composing again. I think that would keep me occupied until I die. Writing’s not the be all and end all. Especially if no one’s reading you.

I’ll leave you with a poem:

I jerked off into a poem today.
I couldn't help myself

and it felt so good too:
the words didn't come easily.

I don't like it to be over too soon;
it's a spiritual thing.

I enjoyed this immensely, especially the piece included by Jude Aquilina.. (They aren’t as useful as portrayed☺).
To get away like you have to write would be a dream. I’ve tried it.. It’s also stressful, the expectations, the pressure to have something to show, when returning to the rest of the world..

I laughed out loud. Wonderfully funny.