Just this morning, like a woman possessed, I drove across town to buy a kilo of pipis, otherwise known as clams, which I could not find anywhere locally, when I shopped yesterday. My husband plans to prepare a Spanish dish, Salpicon de mariscos, for our christmas day lunch

Half an hour's drive from home, I stood with several other people in an orderly queue on Nicolson Street in Carlton.  The people at Canals, the fish mongers, are clever.  They have crowd control in the form of a woman who stands at the door with a clipboard and list of orders to be collected.  She fills out a slip for each of those who arrive to collect their order and ushers in the others, like me, who come to order off the cuff, one at a time.

And so I managed to buy my pipis, which put me in mind of the days before we were aware of environmental sustainability, when we fished for clams in the sand off Venus Bay and collected buckets full of these tiny hard shelled morsels to make dishes fit for royalty.

These days seafood is not cheap, but it was worth the effort.  Even as I felt so much a part of the privileged mainstream lining up for seafood on a Christmas Eve morning.

We have just now passed our summer solstice, that time of the year when day and night are equally divided and after which things begin to head in the opposite direction.  From here the downward trend to winter.

It’s hard to think of winter when it’s so humid and hot here, not as hot as it will get, but my thoughts turn to winter.

My youngest daughter will soon head out into the cold of Europe.  She plans to spend six months studying at the University of Edinburgh.

Take note, my good friend, Jim.  One of mine is coming over to your part of the world.

I’m a little unsettled at the thought – not simply of my daughter on the other side of the world – but the distance between.

And then there’s the usual build up to Christmas, the pressure to get things done before the day which some of us celebrate, while others do not.

There are buckets of conflictual happenings in my part of the world.  A siege in Martin Place in Sydney where three people, the perpetrator and two of his many victims, lost their lives.  Two people in the wrong place at the wrong time and elsewhere in Australia, in Cairns, a mother killed seven of her children and one of her nieces in what could have been an Ice-driven attack or some other madness.

However does a woman manage to kill eight children, aged between fourteen and two, except under some crazed influence.  These events have cast a pall over our otherwise generally peaceful world.

Peaceful, my eye.  It’s just that most of the conflict goes on behind the scenes, out of eyesight, out of the newsworthy range. 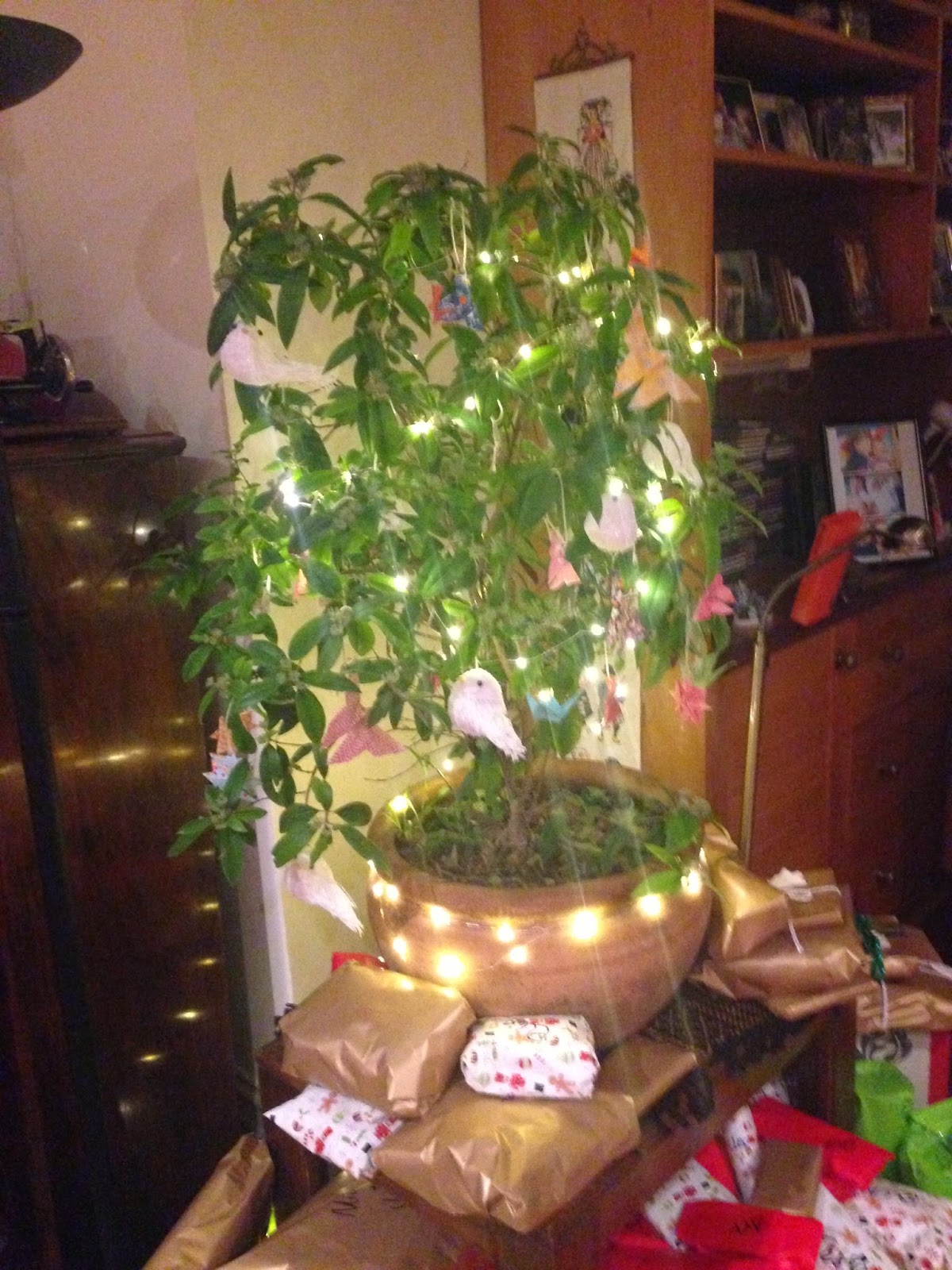 And a lemon-scented myrtle in a large pot glows in our living room.  Don’t be mistaken by the celebratory birds, they are not as one daughter suggested ‘dead pigeons’.  They are papier mache birds with silver sprinkles on their backs and black beads for eyes.

I agree with you. The holidays held at this time of year for many are an escape, usually to memories of better times that really weren’t.
Hope good memories win out over the bad stuff enough to enjoy..

I’ve not visited Edinburgh in about seventeen years, Lis. I can say this with a high degree of certainty because I took Carrie there when she first arrived and yesterday we celebrated out seventeenth wedding anniversary (as well as Christmas since that’s when my daughter and her new beau could come). I used to be fond of the place—despite the high concentration of tourists—but we didn’t particularly enjoy our visit and could never think of a good reason to go back. But your daughter will get on fine. And in all seriousness if she has a problem and there’s no one better equipped then e-mail me and I’ll see what I can do.

We’ve been following Australia’s current trials on the telly. Not that we’ve been without a few ourselves—a half dozen people were killed in George Square in Glasgow when a bin lorry crashed into them—but that’s life. Last year we had a helicopter crash into a pub.

Here, however, all is peaceful and quite. The only excitement we had was when Carrie’s candles set a couple of her ornaments on fire and we walked into the bathroom to find it snowing ash. Quite pretty it was too.

Tis a time of heartache and sorrow for many. A time of false merriment fuelled by excess booze and other stuff.

A time of rush and grab for gifts that nobody, apart from some kids, really want or need.

So, call me Ebenezer, miserable old git, or whatever. Couldn't care less. I just go along with it to save causing trouble for others close to me.

But the best bit, for me, is when it's all finished. All the paper and rubbish is stashed away for some bin-man to collect in a day or three.

Happier new year to you and yours. I hope your daughter does well in Edinburgh. Not one of my favourite cities but it has some attractions. Glasgow is better; better university too, imo.

Christmas has always given me fits of depression along with a festive bout of doom and gloom. It starts right after halloween when the trees and decorations pop up at all the stores. The weight that lifts off my shoulders as I put away our meager decorations is balm to my spirits.