A tub of yoghurt followed by two horse pills is my breakfast these days.  All washed down with one or two cups of tea. 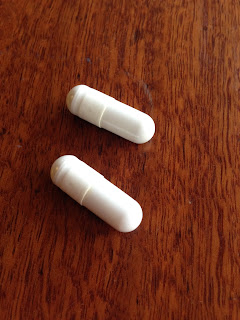 Don’t be fooled by the size.  These ‘horse’ pills are bigger than you think.

By the time one of them hits the back of my throat it turns sideways, even as I put it into my mouth pointy end forward.

To swallow one is to gag and then gulp down mouthfuls of water before they finally settle somewhere in my stomach.

I feared I was on the control dose, by the absence of taste.  They taste like nothing, just the faint tang of plastic, but the woman who asks me questions and runs me through tests told me the pills are made in a factory to certain specifications and all the pills, whether the real thing or the control, are made to taste the same.

I had hoped I’d be on the real thing, not the placebo.

I had hoped I might observe remarkable changes in my cognition, in my memory, in my ability to perform these Lumosity type tasks that the researchers set every time I visit the Swinburne University where the tests take place.

The pills are meant to contain a mint extract, and the hypothesis follows that this extract will improve cognitive functioning in people over fifty.

I haven’t noticed any deterioration, but as for improvement, there’s none there either.

I agreed to participate in this study, not only for the altruism of giving back to the community via scientific research, but also because they offered an MRI as part of the procedure.

A free MRI.  I can establish once and for all that my brain is okay.

In the waiting room at the department for psychopharmacology, the drawing board near reception is filled to the brim with notices of rooms for rent and requests to participate in other research projects.

There are many that deal with so-called 'mental health'.
‘Do you know of or live with someone who suffers from bi-polar disorder?  We’d like to talk to you as part of our research into the condition.’

I cringe.  I have an aversion to the use of psychiatric jargon.

People use these expressions often these days.  So and so has bi-polar, as if it's a concrete and physical disability, like being born blind or suffering from cancer.

So and so has depression.  I much prefer people turn these nouns into verbs.  I reckon it’s more helpful and meaningful to say, ‘So and so is depressed’.

It has something to do with the reductive nature of these psychiatric categories.  When used as nouns they speak about a person as a category.

When we say someone has lung cancer, in our mind’s eye we hone in on the horrors of the cancer, the difficulties of breathing.

We might ask the standard stereotypical question where lung cancer is involved: ‘Did she smoke’, but we do not assume more about the person.  The person still has an identity that goes beyond their diagnosis.

But when we say someone has schizophrenia, for instance, it’s as if their identity is subsumed under the label, and they cease to be a person beyond their diagnosis.

We like to label people and things.  It helps us to get a grip on them, but it’s dangerous as well.

The fantasy seems to be if you get the diagnosis right, correct treatment automatically follows.

I’ve been running through reruns of that TV series House, about a grumpy doctor and diagnostician who works in a busy New Jersey hospital.

The stories tend to be formulaic and dramatic.  They start with someone unexpectedly falling ill, or having an accident.  The person is rushed into hospital and for some strange reason, generally to do with difficulties in diagnosis as to the cause of the problem, Dr House and his team are called in to give a diagnosis.

They start off with hunches based on symptoms, then treat according to those hunches, one of which invariably leads the person to have a heart attack, a stroke or some other major episode in which we are led to believe this person will die.

The person rarely dies, only survives and amazingly, the next day they discover the real cause, which might be a tumour, or some internal bleed, or some unspoken decision on the part of the patient to confess to having done something he or she hadn’t owned up to earlier, like taking cocaine, or LSD or some other illegal substance that’s made them sick.

The body, on the other hand, obeys certain procedures and from time to time the camera peeks inside, via fantastical imagery of what goes on within a blood vessel, a pumping heart, or wasted lungs.

Is it that people lie?  Or do they omit information or construct a story around events so that they don’t disappoint their loved ones, or don't get into trouble with the law?

People, myself inclusive, reinvent themselves in order to present their best selves, or their worst selves, if that’s their inclination.  In any case, it’s an attempt to reconstruct some sense of themselves that meets the needs of the moment.

I’m reconstructing my identity with a move of blog sites, and I’m fearful you won’t recognise me elsewhere.

I’d hate that.  I’m not ready to see the last of you yet.

I hope you’re happy to continue visiting me, even though it might involve a few extra clicks of your mouse to get you there.

You’ll find me at: http://www.sixthinline.com
Posted by Elisabeth at 9:23 am